Borders demarcate the geographic boundaries of a political territory. Borders are critical to a state’s security and carve out its physical place in the international system. When a state cannot control its borders, derive revenue from trade that flows through them, and ensure that illegal trade in commodities (and people) is minimized, the integrity of that state is undermined. Insecure borders can ultimately jeopardize stability and increase the likelihood of conflict. Post-conflict countries rarely have a robust border security system, which is especially important for preventing spoilers from destabilizing the state. Borders can either be prosperity-generating as cooperating states transfer goods, or they can be a porous membrane through which, small arms, and human trafficking pass easily. Fragile states need to protect themselves internally and engage internationally through the legitimate transfer of goods, peoples, and services, or else they are vulnerable to sliding back into conflict. Building and reforming the border security system in post-conflict states is necessary for a successful peace building process. Securing borders is a complex task that involves many different government agencies and professional skill-sets. Border guards, customs, import and export controls, and monitoring of land crossing, air and sea ports, as well as control of transactions are all critical to manage threats from illicit trafficking and facilitate legitimate movement and trade. This range of actors must coordinate to effectively manage borders and promote the states security.The bio-inspired approach to determine group size by researching and simulating primate society. Group size does matter for both primate society and digital entities. It is difficult to determine how to group mobile sensors/robots that patrol in a large area when many factors are considered such as patrol efficiency, wireless interference, coverage, inter group communications.

We consider intruders as robots which misbehave,i.e. Do not follow the rules,because of either spontaneous failures or malicious reprogramming.Our goal is to detect intruders by observing the congruence of their behavior with the social rules as applied to the current state of the overall system.Moreover,the detection itself must be performed by individual robots,based only on local information.

The proposed system of our project is to monitor the border of the nation by using robots. The image processing will be done by using the MATLAB. The information will be transmitted through the WSN transmitter. It have two mode of operation which  are Automatic and Manual mode. In robot section, Robot monitors the boundary compare with the information from the WSN receiver. If any intruder is found, then the robot will automatically emit the chloroform. Ultrasonic sensor used to find the obstacle. If obstacle is present automatically it will take another path. If human will detected around the robot then laser light will be turn on. If anyone attack that robot then it will get self-destructed. 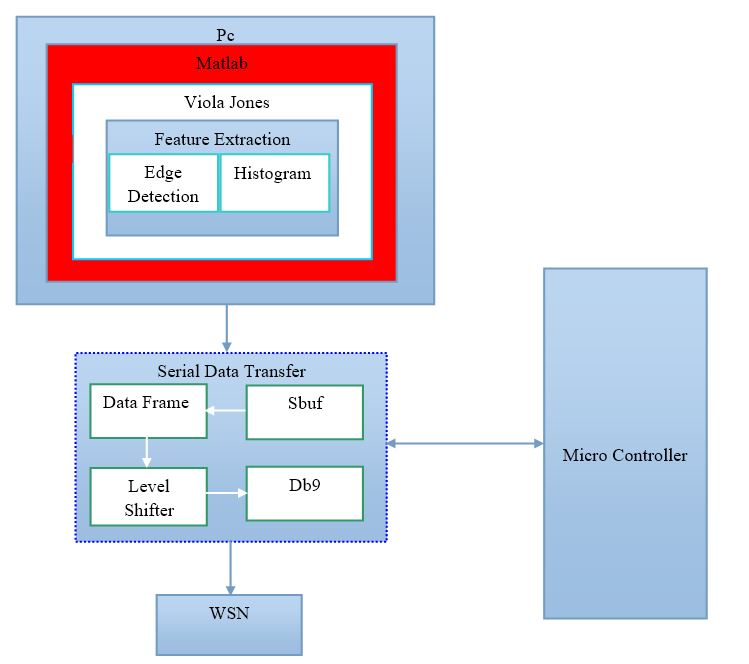 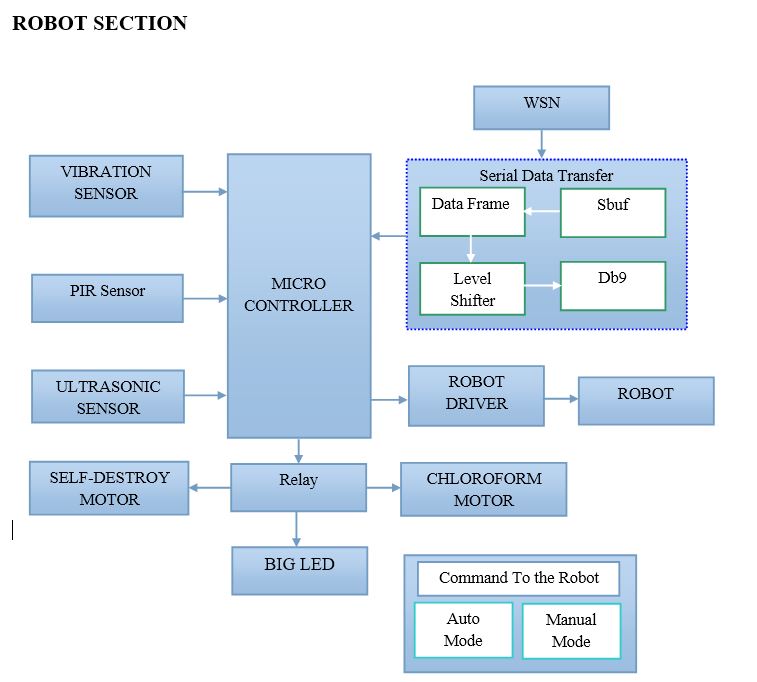